In case you missed it last night a number of #MapLesotho mappers pushed the rural task over 80% complete and 14% validated. We are almost there!

So please steal some time from your employer / study / family this last week of the year and push#MapLesotho over the 90% mark for the new year.

There will be a Mapathon taking place on the 16th of January. More details to follow in the coming days. 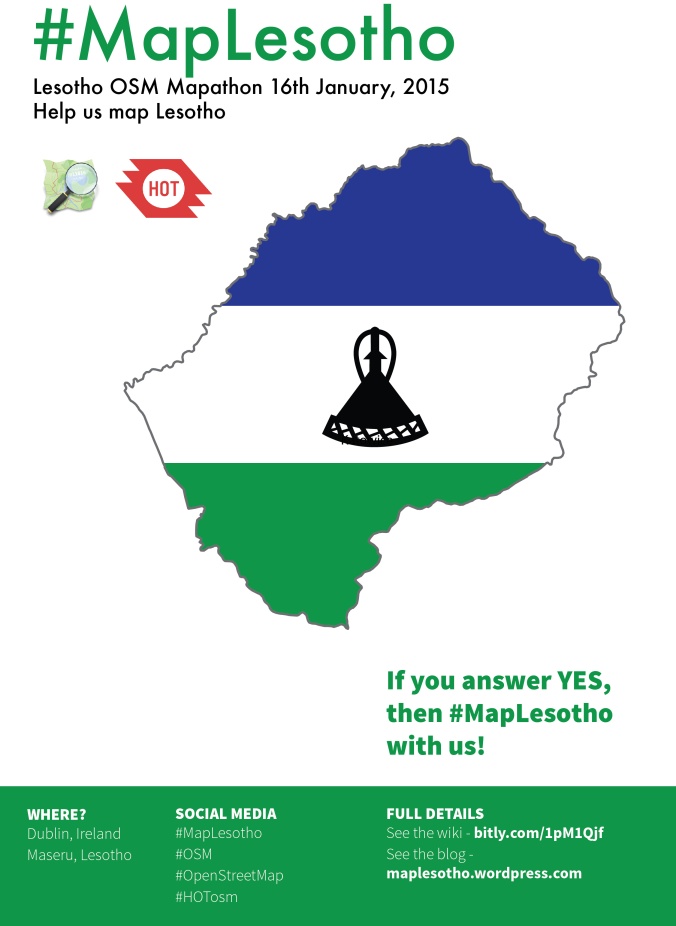 Creating a whole map of a country is a huge task. And such huge tasks have lots of landmarks along the way.

A node is created every time we click the map, putting the turn of a river, the junction of a road, or the corner of a building. A collection of nodes is a relation, so all four corners of a square building are a relation.

When the Fingal Team touched down in Lesotho in February 2014 the kingdom had just over 25,000 nodes. Most of these nodes were uploads from people who drove around the main highways and  tagged a handful of significant building in Maseru. Some mapping was done near Morija outside Maseru, but little else in the countryside except for the dams, the airports and the centre placemark of the bigger towns. Now with 2,044,582 nodes the country has increased in OSM detail by a factor of 82!

Along the way we have had huge inputs from groups and individuals who are too numerous to mention. The Basotho Planners were the first to go, creating around 100,000 of the nodes in an intensive week in February and concentrating on Ha Foso. Then with the help of Dave Corley in April five #hotosm tasks were set up which easily doubled that.

Then we started using the hashtag #MapLesotho all around the world people joined in and our Polish, Canadian, German and Catalonian colleagues each contributed a big splash of edits at various times in the urban and rural tasks.  The person who I need to mention, because he works regularly and consistently is our learnod G.I.S. teacher Shawn Day who trades under the OSM handle Eireidium. Also worthy of mention is Soren Johannessen who, apart from mapping, watches the OSM system stats and tweets about progress!

Soren has compared the OSM penetration in Lesotho with six similar African countries and this makes very interesting reading because it is now, rightfully, a hotbed of sustained OSM activity. The fact is if node creation is a sound measure of mapping engagement then Lesotho is now the 29th most mapped country on the planet, and the fifth most mapped African country.

The challenge we all have is to balance the short-term appeal of crisis mapping, with that of a more sustained interest in mapping a continent that lacks environmental control, and orderly physical development. All of these facts are acknowledged in the Lesotho Government’s own strategies. And we also may need to “end-run” the mapping process in some countries to show what effect creating a freely useable and re-useable store of spatial data has for African governance in planning and environmental management. That sounds lofty, but something we have the chance to prove if we continue to #MapLesotho.

It was just before 1am on Sunday morning that #MapLesotho Rural task hit 60% complete!

That means only 40% to go….the clock ticks down!

Keep up the good work!

We’ve come along way with #MapLesotho so far this year, where recently we achieved 52% of our rural mapping task complete.

Now maybe is a time to look back at the massive amount of edits made by everyone involved.Over 80 individual mappers have contributed to the map so far. Thank you! There are now over 1.7 million nodes in Lesotho, where there were only 500,000 in July 2014.

Below is an animation showing the diff’s (the changes made to the OSM database) from January to 11th October 2014.

Spread the word we’re only counting down to completing the first pass of the Open Street Map basemap for Lesotho now, 48% to go! Give us a hand by taking a tile on our HOT OSM Rural Task.